The Power of an Interpretation

Two days ago, I finished B.R. Myers’ book The Cleanest Race: How North Koreans See Themselves & Why It Matters. Myers is a professor at Dongseo University in Busan and has obtained a sort of minor, local celebrity among foreigners in Busan as a fluent Korean speaker/full-fledged university professor who appears on major media outlets like this Al-Jazeera interview. In the end, I had mixed feelings about the book, but the basic thesis is quite intriguing and goes something like this:

The “communist” label that the world pins on North Korea is completely inaccurate. The ideology and structure of the North Korean state have nothing to do with Marxism or Leninism, and furthermore they never have. Likewise, the idea that North Korean society is highly Confucian is way off base, as the qualities that Northern propaganda attributes to the Korean race contradict many of the basic tenets of a Confucian society. Modern South Koreans, for all their modernity and materialism, retain a Confucian view of their society far more than their Northern brethren. Thirdly, the Juche (self-reliance) ideology that the North professes in its propaganda is a sham idea that is useful for several reasons, but in reality has no meaningful content that could be applied practically, nor would the Northern leadership want to. 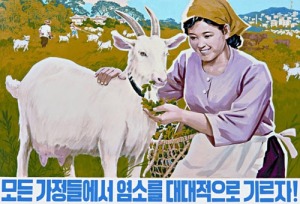 Instead, the animating principal of the North Korean state is a race-based nationalism that idealizes the Korean people as a nation (민족) of child-like purity, whose instincts naturally express themselves when not polluted by foreign influences; the Kim Dynasty (especially Kim Il-sung) represents the ideal embodiment of Korean virtue. In a world of morally inferior people, the peace-loving Koreans have been the victims of history, most especially at the hands of the Japanese (pre-WWII) and even more so the Americans (dating back to the 1800s but intensifying in the 1940s). Kim Il-sung’s role was to rescue the Korean people from foreign predators and to save the southerners (lower-case s intentional) from the clutches of the American imperialists. The majority of the book is devoted to illustrating this basic thesis.

As I said, it’s definitely an interesting idea and an easy read as well. From a comprehension point of view, having lived in South Korea makes many references immediately more real (such as the 2008 anti-US beef protests) and a familiarity with Koreans in general makes the ideas less surprising. That being said, Myers often seems to make his conclusions based on his own opinions and seemingly common-sense assumptions, rather than hard evidence. This is the American Republican party’s style of argument, and that’s not a good sign. Regardless, I’d recommend the book.

The point I’m concerned about here (“The Power of Interpretation”) is the extent to which the book has colored my reading of the news so completely. If you’re familiar with my Twitter account “Kilbride_in_ROK,” you’ll know I basically just look at news about Korea and relay it. For the last two days, every article I’ve read that touches on North Korea has been inescapably colored by Myers’ interpretation, both in terms of what North Korea states in its own releases, as well as the standard interpretations offered by international media. To a certain extent, I feel as though I’ve been missing the point entirely for the last six months, and having read Myers work I can now read between the lines, outside the lines, etc. All the hidden assumptions, logical fallacies, and inherent biases that pervade the coverage of North Korea have been brought to light.

This is a slight exaggeration for the present, and furthermore as time passes I’m sure that Myers’ thesis will not have as strong a hold on my reading as it presently does, though the perspective will certainly remain, even if in a less forceful form.  What inspired me to sit down and right this, however, is the feeling of how complacent we’re able to become and the power of a new perspective to shatter that complacency. It comes as a sort of revelation – that there is another reading! – and no matter how many times we have those experiences they do not cease to surprise. I remember some of my earliest ones being e.e. cummings poetry in high school, Ishmael by Daneil Quinn the summer before college (though I hate to admit it), To the Lighthouse in sophomore year,  and James Joyce’s Ulysses read on various park benches or pub windows in Ireland.

The important thing about all of them is that they force a new interpretation, and what is less fascinating is not the interpretation itself, but the amazement at the fact that you could have been blind to it when it was staring you in the face. And so for that, thank you, Brian Myers, for my North Korea moment.

This entry was posted in Uncategorized and tagged Korea, media, reading. Bookmark the permalink.

One response to “The Power of an Interpretation”